Frrrrrrrrrrrreee! frrrrrrreeeee! I'm freeeee at last! Let the church bells ring! Let the bluebirds sing! He is gone! He is gone! And I didn't even have to kill him! Yabadabadoo I may end up in heaven after all!

That's right, Blue isn't blue. He is one happy son of a glitch and not because his wife kicked him out of the house. Oh happy day! The Happy Humpster is gone!

Sing along! The Happy Humpster is gone. Not dead and gone but gone with the wind, never ever to come back again. Who? The Happy Humpster. Don't you know him? He's the one who made my walls tremble and the deer outside hide in fear. He's the one who spent more time humping than Hugh in his 70-room Playboy Mansion. He moaned so loud in the middle of the night I woke up screaming thinking he was humping my wife right next to me, moaning like a bear in heat as if the fibers of his miserable existence somehow all depended on it. A deep wailing moan. Uuuuuuuuuuuuuh! Uuuuuuuuuuuuuh! Did I mention he was ugly? He was ugly. "A drug-happy criminal", is what his face said. Blue pills aplenty too. And his bed... it made this sound... this very specific sound you bet I will never forget, nor would you if you had been his neighbor ─ a noise so horrific you just wanted to tear your own ears off and eat them like you would a midnight snack. Crrrrrrrrrreak! Crrrrrrrrrrrrrrrrrrrrrrrreak! It would just never ever stop. Monday, Tuesday, Wednesday, Thursday.... No, sir!

And it always started with a single little creak. An innocent little creak. A cute little creak even: "creak". But what it really was... it was a warning sign, is what that was. And then, after a couple of minutes (not seconds), you'd hear a second seemingly innocuous little creak: "crrreak". That's when you knew the train was leaving the station: creak-creak, creak-creak, creak-creak, faster and faster into the night, making my life a living hell. Sure I'd get even by switching on the good ole stereo in the early morning and keeping it switched on all day while he was trying to get some sleep after a hard day's night and I was on my way to work all bleary eyed. But is doesn't make a person happy, you know. It's hard to communicate with a selfish idiot.

And then... a miracle happened. I was lying on my couch one night thinking, It's o so quiet, it's o so still. Maybe he robbed enough banks to go on a vacation. And it stayed that way for a couple of weeks. Strange. Maybe he is dead. And then I bumped into another neighbor of mine, and she said the Happy Humpster had left the building. Like Elvis, only different.

"Could you run that by me once again, neighbor?"
"He's gone. Packed up all his stuff and left." 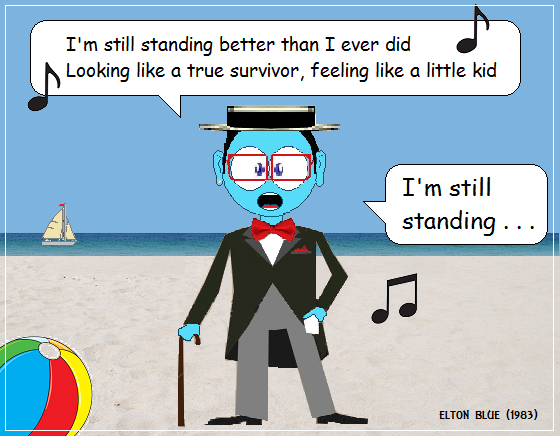 P.S. Click HERE if you want to know or be reminded of how crazy the early eighties were.