Some folks out there wake up all sweaty in the middle of the night, wipe their forehead with a trembling hand, and ask themselves what it would be like to have sex with the new Supergirl. I know you've been asking yourself that very question. There's no need to deny it. Or, if you happen to be a fan of men in tights, you wake up in the middle of the night (all sweaty) and you ask yourself: Hey, what would it be like to be pleasured superfast by the Man of Steel? Not me. Super females suck, and even if they did, I would not be interested. Why is that, I hear you say.

Rumor has it I'm incapable of love. That's a lie. I love women. I do. A lot. I even respect them. Unless, of course, they're ghetto-ho-fabulous or cowgirl-meets-my-wallet and can't find it in their heart to suppress their epic disappointment at the obvious lack of bling-bling ka-ching and where is your twin-turbo V6 Ford GT?

And there is, of course, my boundless love for superheroes. No, I don't respect them. They're not real people, you know. Don't be silly. Unless, of course, I take off my blue cowboy hat and pretend for the sake of argument I'm a total nerd who spends his day frantically — not to mention super-excitedly — comparing non-existing superheroes and their non-existing powers because for some unfathomable reason I just don't have a life. So what is the She-Hulk like in the sack? As your average DC Comics slash Marvel fetishist, you're nerdy-naughty that way. Not me. Enter Supergirl and I lose my appetite. Now, why is that?

Because they're reboots, is why. Ripped-off reboots in the name of equality. Supergirl, She-Hulk, Spiderwoman, Batwoman, The American Dream (what?), Lady Octopus (huh?), and then some. They're rip-offs. Of course, they were all drawn by men, so who's the idiot now? Touché, but they were drawn under pressure in the name of feminism, and none of them do it for me because, ironically, much as they would like to be as powerful as men, they will always be second rate beings — you know, like in real life in most countries in the world. That is NOT super.

Ergo I couldn't care less except to dislike them with a pinch of pity and a hint of hell. Super rip-offs... that's not what women should be about. A real feminist is not a copy of a man, not even a man like me. A real woman has a shadow that she can proclaim to be her own. She does not want to spend her superhero years walking, running or flying in the shadow of her male counterpart — you know, the original creation, the real and more interesting thing. So basically what I'm saying is... Superhero Comic Book Creating Men, give birth (that's right) to superheroes who are not Superman in a skirt or Spiderman with danger-sensitive spidey boobies. You can do it.

P.S. And why is it, dear reader, that the She-Hulk never gets to show her powerful green boobies? I mean, are her clothes manufactured by the PC brigade in some obscure town in Sweden? Well, are they? 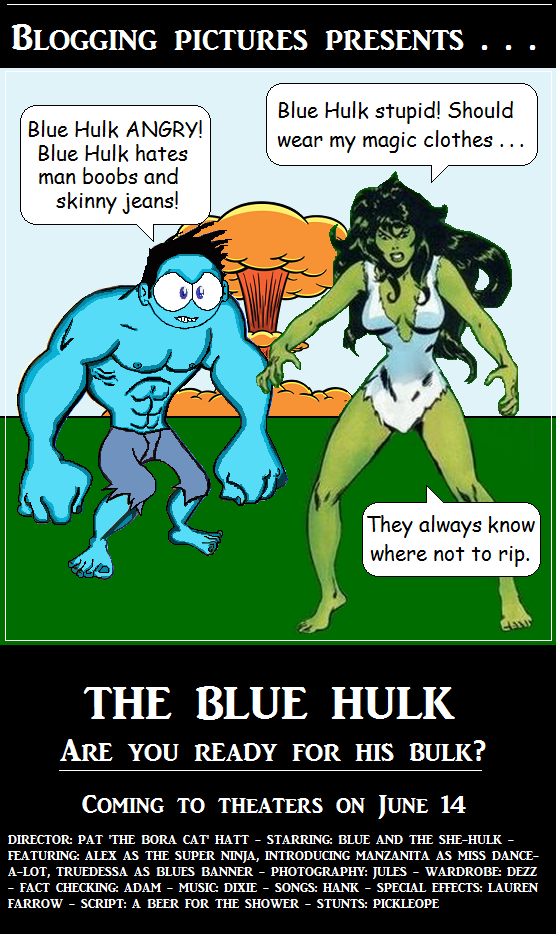