Keep Dreaming When The Force Awakens

When that other much-anticipated movie Avatar hit the theaters in December 2009, the oooohs and aaaaahs swept the nation like Willy Wonka himself was treating the masses to a free and hefty load of chocolate, spared no expense. But as with all things delicious, like steamy sex with lovely Léa Seydoux and Chris Hemsworth (though not necessarily at the same time), there comes a point when eating too much chocolate makes you want to eat backwards, and one glimpse in the mirror is all it takes to hate yourself for at least another week.

If memory serves, watching Avatar twice was all it took for me to swallow my oooohs and aaaaahs, and I still hate myself for believing the hype when it was staring me in the face as if to say, "You gullible, gullible Blue. Spending all that dough. You moron." Now here comes Star Wars: The Force Awakens and I'm hearing the same ole oooohs and aaaaahs and eeeeeeehs to boot, and I wonder: am I being gullible all over again? Are we taken in by J.J. The Dark Lord Of All Things Cloned? Why, yes, of course we are — and no. While Lucas is still licking his wounds for loving his tools more than his audience, J.J. et al know which buttons to press to give us that quick fix of nostalgia. Boy, did I feel like a kid in a candy store. It should've been called Star Wars: Erection Day, but I'm a gentleman, so you'd better strike that comment on my behalf and stop reading if spoilers ruin your day.

Oh there it was again — the desert, that wonderful splendor of golden sand so luring and enticing, making me drool even though I wasn't looking at a naked woman. Friends, if ever there was a franchise that could make an unwelcoming desert look like a long lost friend, nay, an oasis you need to touch simply because it's there, you know it's gotta be Star Wars. And J.J. is your man. He said, "Let's tick all the boxes. What we need is... a desert. Maybe not the same desert, but we need a desert... a desert that reminds everyone of the real thing. You know, the one we saw in A New Hope. And we need... we need... the same opening shot as in A New Hope, only different. We need a Mos Eisley Cantina scene... somewhere else, of course, because we need to be original, but in our rebooted bar scene there has to be a shot of a big and ugly slug-like creature with a sexy young woman sitting right next to him. Yes, yes, like a sort of subliminal Jabba and Leia shot, only really different. The audience will have to blink their eyes three times and think, Wait a minute... I've seen this before. This is so Star Wars minus Jar Jar. Remember... no Jar Jar!"

"Hey, how about another Death Star, only this time we make it really big and dangerous? Yes? Tick! Okay, what else? We need... um someone who reminds us of Darth Vader, but unlike Darth Vader — completely unlike Darth Vader — we let this guy take off his helmet real quick to surprise the audience and kill the suspense in the process haha! And he has to look like a frustrated loser so everyone will think, Wait, that's him? And while we're at it, let's do another touching father and son scene with the same loser, and one of them falls down this Empire-made... I mean, First Order-made shaft or, you know, someplace high, very high, and techno-industrial and completely reminiscent of that scene in The Empire Strikes Back where the guy with the helmet is not the one to plunge into the black depths of space. Yes? But whatever we do, this movie has be better than both the prequels and Indiana Jones And The Saucer Men From Mars. That shouldn't be so tough. So, let's get to work, people!"

And so it happened, and I enjoyed the ride. Twice. Yes, I was fully aware of all the buttons that J.J. was pushing and, except for that really big third freaking Death Star, I didn't really mind. Does that mean J.J. made a really great movie? No, it doesn't, because frankly he didn't. Lucas did. The galaxy that I was once again drawn into, the landscapes that I had the pleasure of revisiting while munching overpriced popcorn, this time in 3D, and even the orange droid and all the characters I had never seen before, they were all of them the collective brain child of George Lucas: I was looking at his desert, his space alien bar, his Han Solo, his Millennium Falcon, his storm troopers and his Empire. George, even that Snoke bastard was your hologram (only J.J. decided to make it, I quote, "really, really big and more intense"). Damn you for ruining your own game!

Yes, emotions were running high as I took in the landscapes of my youth. I felt like Captain Jean-Luc Picard in the dreamlike Nexus: There she was, the love of my life. There she was, beckoning to me, eager to hold my hand and never let go again — "Take my hand," she said — and I did, drifting away into the realm of everything Star Wars IV-VI, but at the same time I knew it wasn't real. It was a clone. It was a bag of tricks. It was the Nexus. But did it matter? No. The drunks needed their booze and I was thirsty. 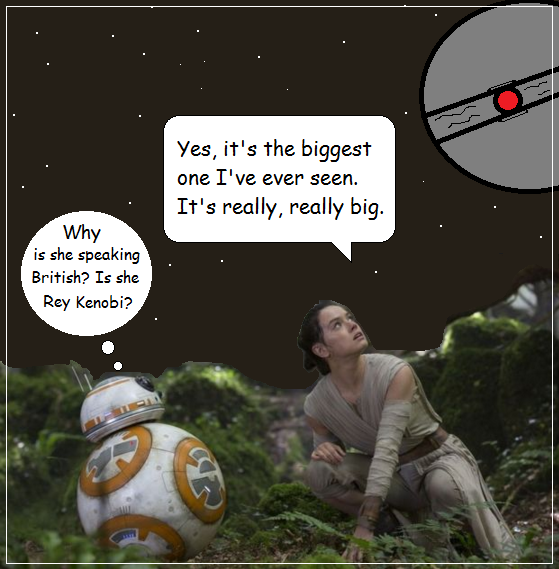 Posted by Blue Grumpster at 7:22 AM