Rest assured this post is not about Mickey meeting the Smurfs, but it comes pretty close. That in its own right is a scary thought if there ever was one.

You see, there's this new What The Flick spin-off called The Reboot, an online test show that, I quote, "celebrates beloved movies from the 70's, 80's, 90's, and 2000's by revisiting them and asking ourselves: What should a reboot look like? How would we modernize it and do them justice?" Much as I like to reserve this special feeling called unwavering hatred with a pinch of disgust for 99% of all reboots (and poor grammar), I gave them the benefit of the doubt and watched the first episode expecting the worst and receiving so much more than just your average bucket of Poopy Terrible.

While I was taking a long eco-unfriendly shower to get rid of said filth and cleanse my soul in the process, I kept wondering, Why didn't I like that show? Why was it so cringeworthy my third leg wanted to scream, "Mayday! Mayday!" and hide inside my butt? You know, like a newborn 1979 alien that flipped the bird on the script and decided to improvise a bit? Ouch! (Erase that image!) Was it, perhaps, my timeworn inability to appreciate reboots? Was that it? I hate reboots so I hate the show? I dropped the soap and felt relieved I wasn't in the slammer when suddenly it just dawned on me: my wanting to nuke the show cold-war style was not because I'm allergic to reboots. What I utterly disliked about the show was how the panel displayed the kind of behavior that is typical of today's princes and princesses: they were acting like a bunch of adult spoiled brats who did not realize they were acting like a bunch of adult spoiled brats. "I want this. I want that. I want this actor to play that role. Ha ha isn't that a smart idea! Okay, let's do an updated version of Back to the Future (because updated equals good), and this time we need a Prius instead of a Delorian. I want the studio to listen to me. I want. I want. I want."

Oh darn. Here we go: ME, ME, ME all over again like a reboot from hell that just won't go away. And, of course, when ka-ching is the magic word, studios listen.

You see, much of today's movie-making might as well be called Movies By Demand, where it's the fanboy / fangirl who in a galaxy not that far away (if only...) collectively decided it's okay to be sitting in the scriptwriter's seat, the screenplay writer's seat and — heck, why not — the director's seat, all in one fell amateurish swoop. As a result, we get crossover movies and crossover books turned into crossover movies that are turned into reboots and rebooted crossover books where Batman fights H.R. Giger's alien, Batman meets The Ninja Turtles (I kid you not: CLICK!), Jason fights Freddy, and aliens fight Predators (or AvP). Versus, versus, versus. What's next: " Mickey vs. the Xenomorph Smurfs in Outer Space"?

Even Ridley Scott, the director of one of the best sf movies to date, gave in to his viewers' complaints about Prometheus, which had disappointed fans across the planet. They wanted scary aliens. They wanted xenomorphs. They wanted corridors and people running in them, preferably the wrong way. They wanted more of the same. More of the same. More of the same. Give me more of the same. I want. I want. I want. And so Mr. Scott caved in and threw his originals plans for Prometheus Part 2 out of the window and lo and behold: there was Alien: Covenant. Fanboy saw all that Ridley had made, and it was very good. And there was evening, and there was morning. There were chest-bursting aliens, friendly facehuggers and screaming idiots, and it was all very, very good. Thank you, Ridley. Thou shalt go to heaven after all. Amen. (Except when you agree with THIS reviewer, and I do.)

"Fine. Now, bring me Mickey," Fanboy Moron said. "And it had better be good. I was thinking... and bear with me, because this is a very, very good idea...

Okay, so Mickey meets Gyro Gearloose, the anthropomorphic chicken turned inventor who had turned a Prius into a mind-blowing device that allows you to cross over to.... another dimension. Mickey hits the throttle, hits a whopping 88 mph and zzzzzzzzzzzzzzzap! ends up in Smurf City, where he falls in love with Smurfette. They have PG-13 sex, but then Mickey is torn apart by guilt because he thought he loved Minnie so much and, yes, saves all the Smurfs from the evil plotting of Gargamel, the Smurfs' arch enemy, in a pixel-porn infested action scene that puts the finale of Fast & Furious 8 AKA F8 to shame. Of course, in the end Papa Smurf says, "Come to Papa," and still bathing in a puddle of sweat, Smurfette realizes her thirst for hot-n-steamy PG-13 mouse sex was just an inappropriate fantasy that she shouldn't have acted on. But she knew all along that's what fans were hoping to see, so she indulged them. Mickey didn't mind. He takes a long eco-unfriendly shower, drops the soap and, saying farewell to an entire village of blue folks, including a handsome blue non-Smurf hiding somewhere behind a tree (fangirl easter egg!), steps into his mighty Prius, hits the throttle, hits 88 mph — that speed of all speeds — and zzzzzzzzzzzzzzzzap!"

The crowd goes wild ("Hooray! Hooray! Encore! More of the same!"). The movie theater is declared holy ground by fanboy extremists and is aptly renamed Fanboy Shrine (or Fan B.S.) the following day. What a spectacle! Life is good! Thank you, God!

P.S. Rest assured this post was not about Mickey vs. the Smurfs, but it sure came pretty darn close. Just the way you wanted it. 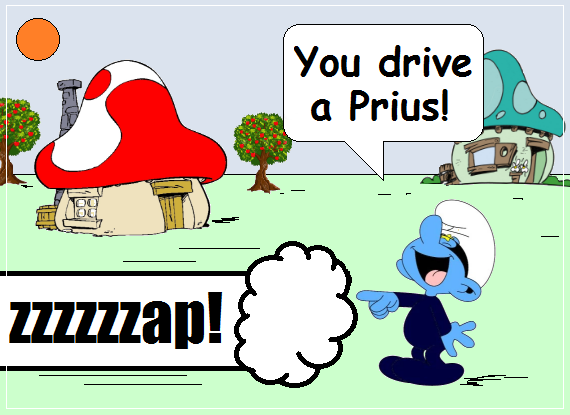 Posted by Blue Grumpster at 1:47 PM