Seize the Day or Cease the Day?

Oh there was a time when special days were actually special with a capital S. No, I don't mean Halloween or Christmas Day or Valentine's Day. I'm talking about those more recent 'World Something Days', such as the World Cancer Day on February 4 — days on which we dwell on the seriousness of a problem or anything worthy of special global attention. But... 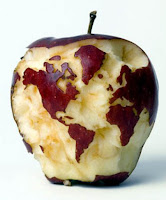 ... now it seems there are days for frigging everything. There's a World Toilet Day (November 19) — I kid you not. There's a World Cleanup Day (September 15) — yes, sir, and it wouldn't surprise me one bit if there's even a World LOST Blue Shoe Day. Inflation is the word that springs to mind, so now I wonder if you feel the same way.

I have a very simple question for you. Which of the following World Something Days would you blowtorch to kingdom come (pick one) and which one do you reckon is of great importance?

Here are the nominees...

Posted by Blue Grumpster at 6:05 PM