Why We Can't Yell at Other People's Kids

I hear you saying, "Sure we can." I see you shake your head as if to say, Of course we can, you nitwit. No, you can't. You can't yell at other people's kids — because if you do, someone is going to bite your pretty little head off. Now ask me why.

The truth of the matter is, we people, masters of the universe, the smartest creatures between Venus and Pluto, Hillary and Donald, are slowly becoming a bunch of hypersensitive sons of bitches. If you think that's sexist or just plain rude, I rest my case, not caring to explain that a bitch is a dog and that sons aren't daughters. "Oh I'm so offended!" How did we become so whiny, pouting our soy protein-infused lipglossed lips every time someone says something that offends us? (You may have noticed me using the words we and our. That's because I'm trying hard not to offend you.) Oh screw that. I mean people in general. That may include you and the Pope.

So when you're unloading your grocery cart full of Stouffer's frozen dinners onto the conveyor belt, and this four-year-old spoiled brat is throwing a tantrum because he feels entitled to a life time supply of Starburst, don't yell at the little moron or give Mama Bear and Papa Bear a look that doesn't require a bright interpreter. They'll explode like a teen having sex for the first time. It's quite the spectacle. On second thought, maybe you should — especially when the kid from hell, who was scratching his butt a minute ago (waiting for his parents to take a picture), is now touching your frozen dinners. Go nuts on him when his parents don't remind him who's in charge, and see what happens.

That's when they leap into action. That's when you realize they were paying attention all along but probably thought everyone else found their kid's misbehavior cute and adorable. THEY did, so how come YOU did NOT? What's wrong with you? Are you even human? How dare you tell me my kid's imperfect? How dare you criticize my impeccable parenting style?!

People who put their kids on a pedestal believing they're the second coming or the next best thing to beer will not appreciate your comments. Some will even punch you in the nose. That's what parents do who take 10,000 pics a day of their princes and princesses. That's what happens when you're so full of yourself it doesn't strike you as remotely possible that either you or your kid needs a bit of guidance. That's what happens when Me-Me-Me creates a Mini-Me and everybody else keeps walking on eggshells in a world where political correctness has gone overboard and Social Justice Warriors make your life a living hell if your view differs from theirs.

Don't be scared to offend people. 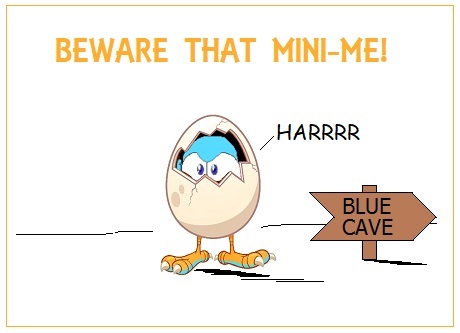 Posted by Blue Grumpster at 5:24 PM